Happy New Year! As 2019 dawns, we’re getting a little nostalgic thinking about the year that was. Filled with achievements, challenges, beginnings and milestones - 2018 was another exciting chapter for Fab Lab Barcelona. 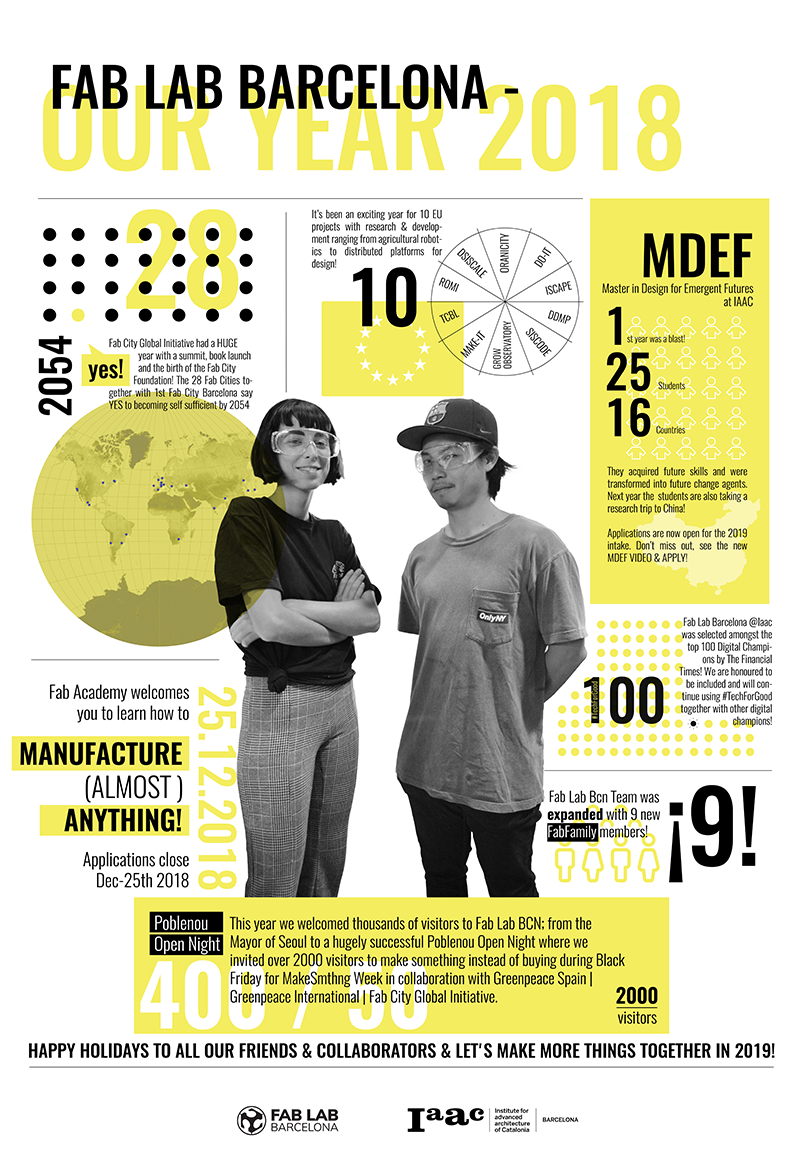 Fab Lab Barcelona at IAAC was selected amongst top 100 Digital Champions by The Financial Times! We are honoured to be included and will continue using #TechForGood together with other digital champions! One of our favourite #TechForGood moments from 2018 came from the #ambmakers program run by our Future Learning Unit in collaboration with Fundació Pere Tarrés, Barcelona Ciutat Digital and Micro:bit Educational Foundation. Young people made a low-tech device for their grandparents which alerted family members in the case of a fall!

Made@EU which was coordinated by Fab Lab Barcelona at IAAC from 2014 - 2016 has been granted the title of Creative Europe Success Story! “Success stories” are finalised projects that have distinguished themselves by their impact, contribution to policy-making, innovative results and/or creative approach and can be a source of inspiration for others. 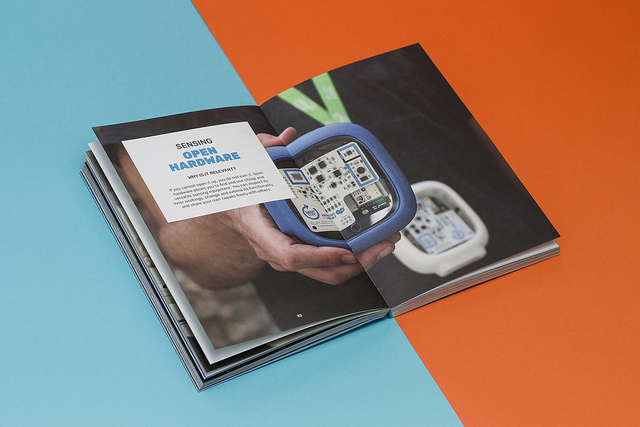 The Making Sense project funded under the H2020 European Union fund from 2015 - 2017, has been recognised for excellence with an honorary mention at the 2018 STARTS prize: the grand prize of the European Commission honoring Innovation in Technology, Industry and Society stimulated by the Arts. The easy-to-install toolkit developed in collaboration with the Smart Citizen Kit was recognised as part of the honour. The Making Sense documentary ‘Citizen Science Revolution’ was also released earlier this year in collaboration with Playground.

Educating for our future

Fab Academy had it’s 9th year of making (almost) anything this year, culminating in the students being awarded their certifications at the Fab 14 conference in Toulouse, France. The faculty is looking forward to welcoming new students to #MakeYourJob in 2019 - the 10th year of Fab Academy Barcelona!

This past year IAAC also pioneered the Master in Design for Emergent Futures! 25 Students from 16 countries joined faculty from Fab Lab Barcelona and acquired the skills to transform them into future change agents. At the beginning of their second year the students will take a research trip to Shenzhen, China! 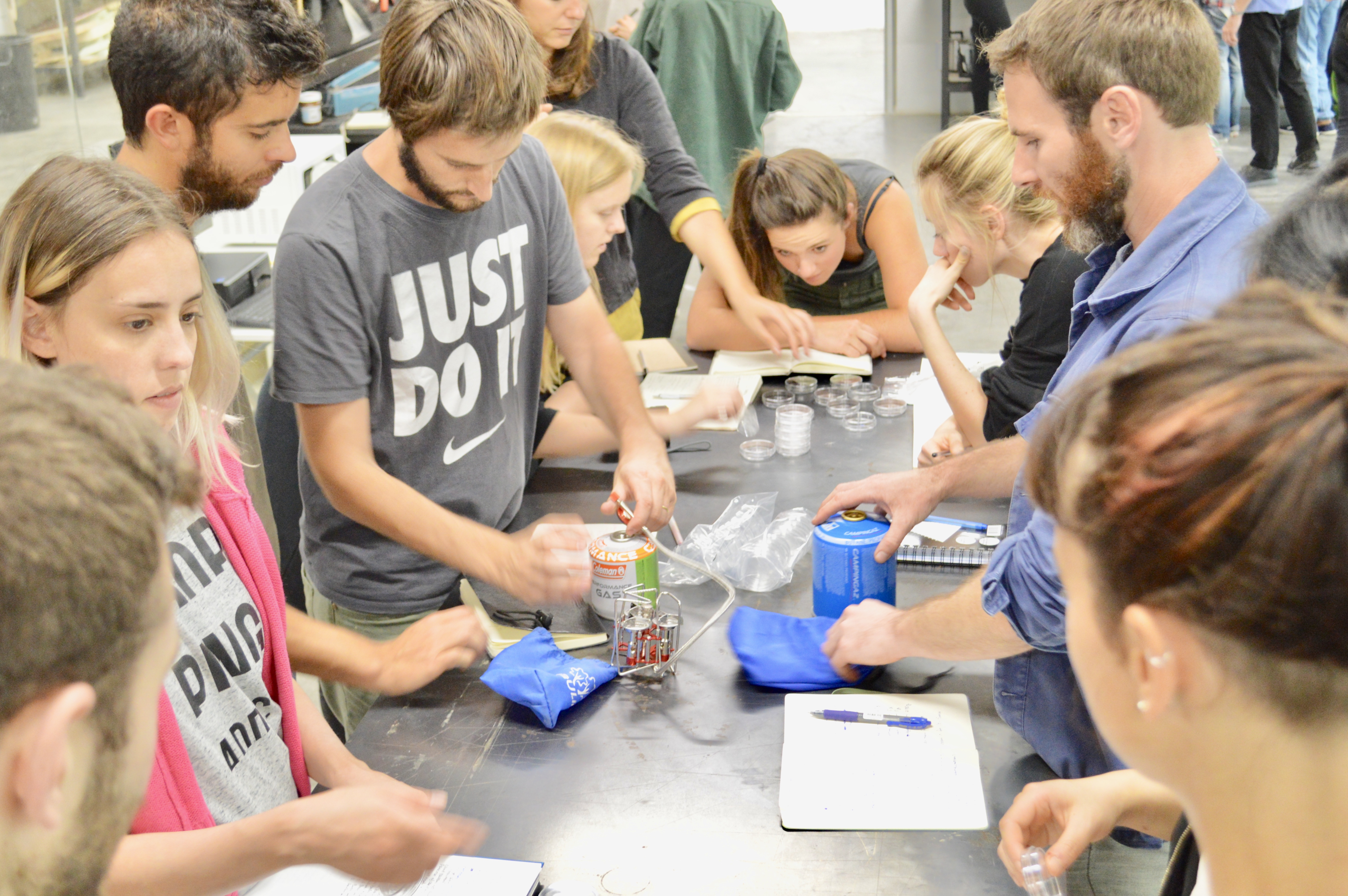 Do you believe innovation is necessary in our ever changing world? See the video teaser here and join the 2019 intake - applications are NOW open!

Fab City Global Initiative had a HUGE year with a summit, book launch, new website and the birth of the Fab City Foundation! The 28 Fab Cities together with 1st Fab City Barcelona say YES to becoming self sufficient by 2054. 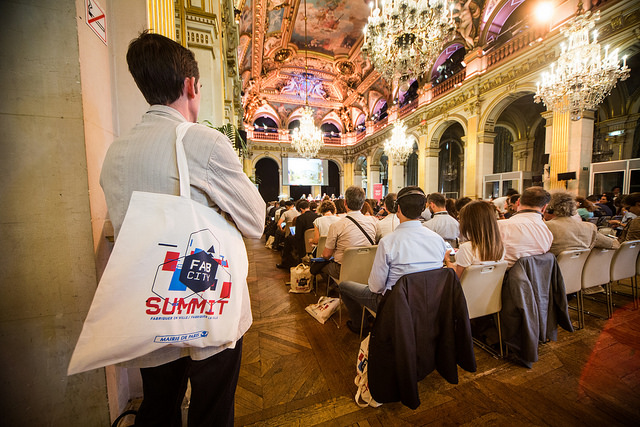 This year we welcomed thousands of visitors to Fab Lab BCN; from the Mayor of Seoul to a hugely successful Poblenou Open Night where over 2000 visitors made something instead of buying during Black Friday for MakeSmthng Week in collaboration with Greenpeace Spain, Greenpeace International, Fab City Global Initiative. We co-produced Maker Faire with SokoTech and Sonar Festival for another year, solidifying the maker narrative in the cultural field of Barcelona.

A big happy holidays to all our friends, collaborators and Fab followers. Looking forward to 2019 to make more of anything with you all!